The coat of these miniature Australian Shepherds can be wavy or straight. It is medium length and weather-resistant. Colors vary from red merle and red, black, or blue merle. They may or may not have white markings and tan points. The tail is either a natural bobtail or docked and some have blue eyes.

The disposition of a Toy Aussie is good-natured and happy. They retain the instinct to herd, even if they have not come in contact with livestock. The temperament and character of the Toy Australian Shepherd are that of a herding dog regardless of its size. Some herd their owners.

Toy Australian Shepherds that are marked for show have a lineage that traces back to a pair of brother dogs, the Wildhagen Dutchman and Fieldmaster of Flintridge. The breed had no uniformity in appearance until 30 years ago.

The Toy Australian Shepherd is eager to learn and intelligent. Even as a Toy Aussie puppy, they are devoted, loyal, and relaxed. They bond closely with families. Some are so devoted that they develop separation anxiety. Aussies are lively and confident.

They often behave like puppies. A Toy Australian Shepherd is an excellent companion for other pets and children, especially when they are socialized as puppies. They are territorial by nature and are sometimes shy around strangers.

The miniature Aussies are kindhearted and affectionate, though they bore easily as most are not well-adapted to a sedentary lifestyle. This is not the breed of dog for someone who wants to plop on the couch with a remote in hand after working all day. 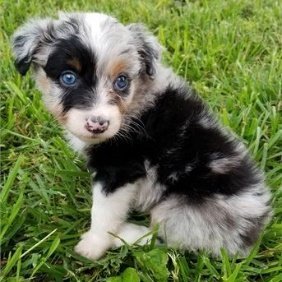 I love Waggs! It is so clean, and has the healthiest puppies! I got my Daisy Bear there and she is the best dog ever!