The earliest records surrounding the development of the Standard Schnauzer in Germany come from the late 19th century. They were originally bred to be medium-sized farm dogs in Germany, equally suited to ratting, herding, and guarding property. As time passed, farmers bred the Standard Schnauzer into a smaller, more compact size for ratting by combining it, according to cynologists theorization, with one or more small breeds such as the Affenpinscher and Miniature Poodle, Miniature Pinscher, or Pomeranian, or by chance from smallest specimens of the Standard Schnauzer. The first recorded Miniature Schnauzer appeared in 1888, black female named Fidel, and the Pinscher-Schnauzer Klub (formed in 1895) in its first volume of the club’s stud book mentioned Wirehaired Miniature Pinscher. The first exhibition was held in 1899.

The AKC accepted registration of the new breed in 1926, two years after Miniature Schnauzers were introduced to the United States. The American Miniature Schnauzer Club was formed in 1933, from the older parent club Wire-Haired Pinscher Club of America which also included Standard Schnauzer, and initially both competed in the Working Group until 1927. International Kennel Club classifications vary; by the VDH and FCI it is placed in “Group 2, Section 1: Pinschers and Schnauzers”, with “Nr. 183” in “Section 1.2” dedicated to the Miniature Schnauzer breed, the KC, ANKC and NZKC include it in the Utility Group, while by the AKC, UKC and CKC the Miniature Schnauzer is classed in the Terrier Group.

The start of the modern Miniature Schnauzer in the United States is considered to have a beginning in 1924 when four dogs were imported from Germany. It is argued that almost all American-bred Miniatures partly descend from them, and between 1926-1936, 108 more dogs were imported. One of the most notable champions was Ch. Dorem Display, born in 1945 and lived to be nearly fourteen. It is claimed that many champion Miniature Schnauzers in America can trace its lineage back to Dorem Display. 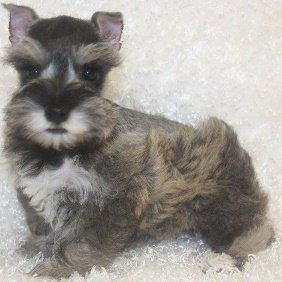