The Miniature Goldendoodle is a small to medium dog that is affectionate and attentive. They are the result of a cross between a Golden Retriever and a Miniature or Toy Poodle. This has produced a dog that has a friendly, mild nature that looks like a small fluffy teddy bear. Because of this, they have become a popular family dog who loves children, and is a devoted companion. They have the energy and prance of the Miniature Poodle, while retaining the gentleness and willingness to please of the Golden Retriever. The Mini Goldendoodle loves human contact, they will follow you from room to room just to be with you, and loves to cuddle. They can be quite goofy, entertaining you with their tricks and high energy antics. He is an intelligent dog who doesn’t like to be left alone for too long – they can get anxious and fret from long separation.

The Miniature Goldendoodle appeared around the mid 1990s, and was bred to be a dog with the gentleness of the Golden Retriever with the intelligence and coat of the Miniature Poodle. Always check with a reputable breeder how they achieved their dogs. But lets look at the history of the parent dogs as the puppies will inherit some of their traits. The Poodle is an ancient breed, going back a couple of thousand years. They come from Germany and were working dogs, retrieving water fowl for the hunters. The French population loved the Poodle and refined the breed further into three sizes, the Standard (used for retrieving waterfowl), Miniature (for finding truffles) and the Toy Poodle (as companions for French Nobility). They were also responsible for the outrageous hairdo that we associate with the Poodle, which originally was designed by circus staff who trained him to entertain. While often considered ‘posh’ the Poodle is a dog with a sense of humor, is easy to train, and has an affectionate calm nature. The Golden Retriever is a gentle loyal dog that responds well to training. Their breed began in the 19th Century with a Lord Tweedmouth in Scotland, who wanted a dog that was attentive, loyal yet still retained the abilities to retrieve waterfowl without damaging the bird. Refinements continued until it was officially name in 1920. Their ability to be both a working dog and loyal companion has been the secret to their success. In 1932 the Golden Retriever was recognised by the American Kennel Club and the breed went on to become one of the most popular purebreds. They are known to be great family pets, devoted and loyal to their owners, and adore children and clowning around with them. 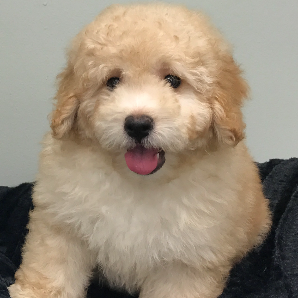