An energetic, friendly little pup, the Chipoo is a great companion dog and loves to be part of a family environment. He loves to play, is quite intelligent, considered easy to train due to his desire to please, and because of a tendency to bark when excited, he is an effective – albeit tiny – guard dog. He is also known to be quite independent, turning any space into his own personal play zone – including a small apartment – so lots of toys are a wise investment.

Similar to other designer dogs that have Miniature or Toy Poodle DNA running through their veins, Chi-Poos likely originated in the U.S. back in the 1970s – a decade after the first poodle-mix (the Cockapoo) came on the scene. The Chihuahua is thought to date back to an ancient civilization that lived in Mexico between the 10th and 12th centuries. Poodles are believed to have originated in Germany around the 13th century, while the more recent Toy variation came out of the U.K. around the 18th century.

The Chipoo is a great companion dog and loves to be part of a family environment. Traditionally the hybrid Chipoo has been considered a designer dog because of lineage that comes from two pure-breds that are recognized by the American Kennel Club (AKC) – the Chihuahua in 1905 and the Poodle in 1887. While the Chipoo is not a pure-bred and therefore not recognized by the AKC, it is by other groups (and under other names) such as the American Canine Hybrid Club (Chi-Poo), the Designer Dogs Kennel Club (Wapoo), International Designer Canine Registry (Chi Poo), and Designer Breed Registry (Choodle or Wapoo).

Chi-Poos can have trouble digesting some of the ingredients found in typical generic dry dog food, so it’s important that he be fed a high quality version that is formulated specifically for small dogs. With a propensity for hypoglycemia (low blood sugar), this active little breed should also be fed several small meals throughout the day in order to avoid spikes and drops in blood sugar. 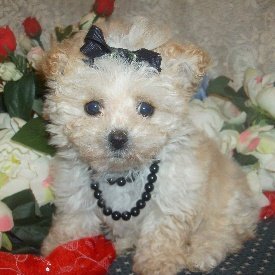 I love this store the employees are very nice and knowledgeable on each specific breed so happy with my new baby.