A cross between two small breeds, the Cavachon is a lively, affectionate, and playful little dog. This breed comes from the crossing of a Cavalier King Charles Spaniel and a Bichon Frise with the hopes that he will inherit the best characteristics from both. Though you cannot make exact predictions about a mixed breed dog, the Cavachon is generally a friendly family companion who gets along well with children and other dogs. This breed is not overly active and their small size makes them adaptable to apartment and condo life. If you’re in the market for a small-breed dog that will fit into your family life, the Cavachon may be one to consider.

The Cavachon is a mixed breed that results from crossing a Cavalier King Charles Spaniel with a Bichon Frise. There is no doubt that mixed breed dogs have been bred throughout the centuries, but it is only within the past few decades that the “designer dog” movement has gained speed. The term designer dog usually refers to a mixed breed – an intentional cross between two breeds to produce desired traits. Though these two breeds may have been mixed before, there is a specific breeder who claims to have created the Cavachon breed in 1996 – Gleneden.

Because the Cavachon is a blend of two pure breeds, its history is a combination of their histories. The Cavalier King Charles Spaniel is a breed of UK origin that is classified as a toy breed by both The Kennel Club and the AKC. The origins of the breed can be traced back to the early part of the 18th century when John Churchill, the 1st Duke of Marlborough became known for his red and white hunting spaniels known as King Charles Spaniels. Eventually, the red and white type became known as the Blenheim spaniel, named after Churchill’s estate, Blenheim.

Throughout the years, numerous attempts were made to revive the original King Charles Spaniel type. Many breeders used the now extinct Toy Trawler Spaniel in their attempts. It wasn’t until the 1920s, however, that the Blenheim Spaniel made a resurgence. To encourage this revival, American Roswell Eldridge created a contest and offered a prize of twenty-five pounds for the best male and female spaniel of the Blenheim type. Though Eldridge died before the contest concluded, other breeders followed his lead and created the Cavalier Club in 1928. They also published the first breed standard for the King Charles Spaniel, Cavalier type.

The Second World War saw many breeds in steep decline as a majority of the breeding stock was destroyed due to wartime food shortages. After the war, six dogs were used to develop the modern-day Cavalier. The Cavalier King Charles Spaniel was officially recognized by the Kennel Club in 1945 and the breed arrived in the United States sometime during the 1950s. The first American breed club was formed in 1994 and the Cavalier King Charles Spaniel was accepted by the AKC in 1995. One year later, Gleneden kennel began breeding the Cavachon.

The history of the Bichon Frise predates the Cavalier King Charles Spaniel by several centuries. Descended from the Barbet (or Water Spaniel) and the Standard Poodle, the Bichon Frise is one of four Bichon-type dogs. Though Spanish in origin, this breed came to be associated with the French who turned it from a sailing dog into a lap dog. The four original Bichons were the Bichon Maltese, the Bichon Bolognaise, the Bichon Havanese, and the Bichon Tenerife. The Bichon Tenerife became particularly popular in France during the Renaissance and its popularity skyrocketed during the reign of Henry III in the late 1500s. Its population rose and fell over the next few centuries until it once more gained popularity in the late 19th century.

By the 1800s, the Bichon Tenerife had become a common dog, running the streets of Barbary. In the 1930s, the release of Herge’s The Adventures of Tintin featuring a fluffy white terrier sparked an increase in popularity for the breed. At the time, the breed was still known as either the Tenerife or the Bichon but the president of the FCI proposed a new name – Bichon Frise. The word “frise” means curly in French and the name was quickly adopted. The Bichon Frise came to the United States in 1955 and it was accepted by the AKC in 1972. Today, it is consistently ranked among the top 40 most popular dog breeds according to AKC registration statistics. 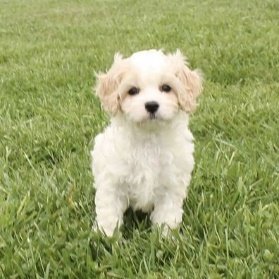 This store is the best! I get my poodle groomed here and Lynn does a great job. The store smells really good and the puppies are so cute. I highly recommend you shop at Waggs.