Pugs are popular little companion dogs with great personalities. They are companion pets more than anything and will enjoy spending time with the family. They will get along great and demand attention from anyone in the family, including children, or even strangers. These dogs are small but stocky, and will do well in any loving home environment, including apartments. However, they are predisposed to quite a few illnesses, and some of their unique features, like the large, protruding eyes and adorable face wrinkles, may need some extra care to keep them healthy. Besides that, these dogs are relatively low maintenance, but do still shed a lot. They are not hypoallergenic but have low drooling tendencies and moderate smell levels.

The adorable and well known Pug originated in China sometime between 206 B.C. and 200 A.D., which was during the Han dynasty. These dogs were owned by Emperors of China and treated like royalty, and sometimes they even had soldiers guarding them. There has also been evidence of dogs that are similar to Pugs found in ancient Tibet and Japan. These dogs obtained a new name, Mopshond, when they were brought to Europe along with Dutch traders in the 1500s and 1600s. After they made their appearance in Europe, Pugs became a popular choice for royal households. As the Pug began to make an appearance around the world, the breed was often given new names. For example, they were called Carlin in France but known as Doguillo in Spain, in Germany they were given the name Mops and in Italy, these dogs go by the name of Caganlino. In the 1800s there were two dominant breeding lines in England, one of them being the Morrisson line, which was apparently founded on Queen Charlotte’s royals dogs, and the other was founded on dogs that were imported from Hungary and Russia, and was started by Lord and Lady Willoughby de Eresby. They were eventually brought to England in 1861 when the Chinese Imperial Palace was overrun by the British. The Pug was featured on many postcards, figurines and paintings during the Victorian Era, in which they became very popular. It was after the Civil War that this breed came to the United States and in 1885 got recognized by the American Kennel Club. The foundation of the Pug Club of America was in 1931. 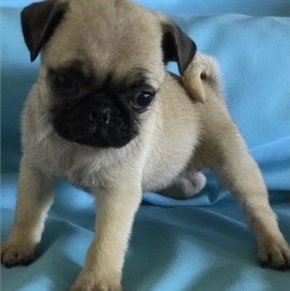