The Cavalier King Charles Spaniel is a small spaniel classed as a toy dog by The Kennel Club and the American Kennel Club. It originated in the United Kingdom and is one of the more popular breeds in many countries. Since 2000, it has grown in popularity in the United States and ranks as the 18th most popular pure-breed in the United States (2013 Registration Statistics). It has a silky, smooth coat and commonly a smooth undocked tail. The breed standard recognises four colours: Blenheim (chestnut and white), Tricolour (black/white/tan), Black and Tan, and Ruby. The breed is generally friendly, affectionate and good with both children and other animals; however, they require a lot of human interaction. Since they are a family dog, it is recommended to not leave them alone for long periods at a time. The expected average lifespan of a Cavalier King Charles Spaniel is under ten years.

The Cavalier King Charles changed dramatically in the late 17th century, when it was interbred with flat-nosed breeds. Until the 1920s, the Cavalier shared the same history as the smaller King Charles Spaniel. Breeders attempted to recreate what they considered to be the original configuration of the breed, a dog resembling Charles II’s King Charles Spaniel of the Restoration. Various health issues affect this particular breed.

Attempts were made to recreate the original Cavalier King Charles Spaniel as early as the turn of the 20th century, using the now extinct Toy Trawler Spaniels. These attempts were documented by Judith Blunt-Lytton, 16th Baroness Wentworth, in the book “Toy Dogs and Their Ancestors Including the History And Management of Toy Spaniels, Pekingese, Japanese and Pomeranians” published under the name of the “Hon. Mrs Neville Lytton” in 1911.

Historically the Cavalier King Charles Spaniel was a lap dog and is small for a spaniel, with fully grown adults comparable in size to adolescents of other larger spaniel breeds. Breed standards state that height of a Cavalier should be between 12 to 13 inches (30 to 33 cm) with a proportionate weight between 13 to 18 pounds (5.9 to 8.2 kg). The tail is usually not docked, and the Cavalier should have a silky coat of moderate length. Standards state that it should be free from curl, although a slight wave is allowed. Feathering can grow on their ears, feet, legs and tail in adulthood. Standards require this be kept long, with the feathering on the feet a particularly important aspect of the breed’s features. 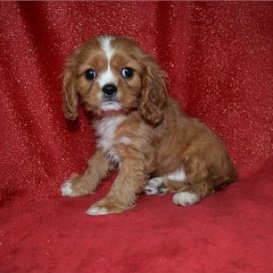 This is the best store there is! The owner Kim helped me purchasing my baby Bella. She was very helpful and made the process very pleasing. My baby Bella is a yorkie and 8 months old now and I love her! Thank you Kim and Waggs!